‘I am rich because I always engineer my strokes of luck.’
– Scrooge McDuck 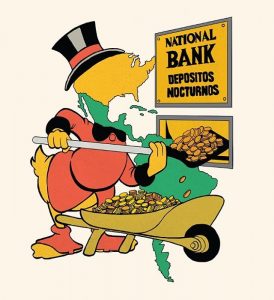 In 1970, after decades of living under the thumb of foreign debt and American influence, the nation of Chile became the first South American country to democratically elect a left-wing government with the victory of Salvador Allende’s Popular Unity party.

As part of Allende’s broad initiative to promote and strengthen his party’s progressive agenda, which included renationalising the country’s lucrative financial and mining industries from the hands of U.S. owners and investors, the Popular Unity party established a large-scale cultural project promoting film, theatre, music, and literature with an uplifting, socialist message.

One arm of this was the establishment of a state publishing house, Quimantú (‘Sunshine of Knowledge’ in the language of Chile’s indigenous Mapuche people), which over the next 2 years would publish double the books that had been published in the whole of Chile in the previous 70; 5 million.

Among these books was How to Read Donald Duck: Imperialist Ideology in the Disney Comic, a text by Ariel Dorfman & Armand Mattelart exploring the subtle role Walt Disney’s globally-distributed comic books played in promoting American imperalism, and how Disney’s supposedly apolitical, ahistorical stories were in fact laced with a western colonial ideology which both banalised notions of left-wing populism and rendered colonial subjects in developing countries “noble savages” who should welcome their benevolent imperial masters with open arms.

Sadly, Allende’s revolution would be short-lived. On September 11th, 1973, he was overthrown by right-wing authoritarian Augusto Pinochet (with the active support of the CIA and U.S. Military) who for the next 17 years would brutally suppress opposition, “disappearing” over 2,000 political opponents, torturing over 30,000 and sending tens of thousands more into political exile – it’s these actions, by the way, that member’s of America’s right-wing are referring to when they claim Pinochet “did nothing wrong”.

By the end of 1973, Pinochet’s government had confiscated and burned thousands of books. The entire third pressing of How to Read Donald Duck was dumped into the ocean by the Chilean Navy. Now, for the first time since then, the book has been republished by an American publisher, OR Books.

Examining close to 100 issues of various Walt Disney comic books (by far the most ubiquitous form the company would take in the developing global south), Dorfman & Mattelart reveal the deeply individualist, pro-capitalist message Disney smuggled into his stories. At the heart of this, they examine the popularity in Latin America not of Mickey Mouse, the bright-eyed, optimistic go-getter who always saves the day, but of Donald Duck, a hapless, down-on-his-luck character who; understandably, always needs money; clearly, is incompetent; unexpectedly, always finds a job, and; unsurprisingly, always gets fired.

The book’s examination goes deeper, drawing attention to the absence of mothers and fathers in Disney’s family trees. There are no paternal bonds between Donald and his miserly uncle Scrooge McDuck for example, nor with his nephews Huey, Dewey and Louie. In constructing a world where there is no direct lineage between the characters, Disney is able to make the wealth and fortunes of each character ahistorical – McDuck has no obligation to share his money with Donald, nor should Donald expect any.

This ahistoricality is then replicated in other areas. Many of the stories examined in the book revolve around the heroes travelling to faraway lands to find lost treasures described on some ancient scroll or another. The history and temporality of this wealth is erased; the reader is not told who created this treasure, nor where it came from.

The antagonists of these stories, another group seeking the treasures for themselves, are distinguished by the fact that they do not own a map and, as such, the riches are not destined for their hands. The antagonists are then eventually foiled as a result of their inherent greed, corruptibility and stupidity. In Disney’s stories, the virtuous always win, and the foreign riches always go to those with the brains to know what do with it. And, thanks to atemporality, they are always gone by the next issue, ready for the next adventure.

Huey, Dewey and Louie: We’ve tried these wild west fortune hunts before, Unca Donald, and haven’t made a profit yet!
Donald: That’s because we never got far enough into the wilds!

Disney also excuses the problem of any of his protagonists’ spoils being claimed by locals by leaning on another popular trope in colonial narratives, that of the “noble savage”. Having established an atemporality where children have no parents and adults no dependents, Disney then transforms natives into child-like figures who, amazed by simple things like watches, trinkets, or even soap bubbles, gladly hand over their jewels and treasures for which they have no use – ‘Each time this situations recurs, the natives’ joy increases. As each object of their own manufacture is taken away from them, their satisfaction grows. […] they are in their desert tents, their caves, their once flourishing cities, their lonely islands, their forbidden fortresses, and they can never leave them.’

This ideology reaches its logical endpoint in one story where Scrooge McDuck trades with a Venusian alien by purchasing a 24-carat moon for a fistful of dirt, calling it ‘the biggest bargain I ever heard of in all history’. Fortunately, the Venusian then transforms the fistful of earth into a whole planet, explaining that he was ‘impoverished here, with only atoms of gold to work with’. For Disney, the colonial subject is inherently tied to a rural, subsistence lifestyle – the imperialist is doing them a favour by taking their useless wealth and putting it to better use.

The book also draws attention to the anti-collectivist undercurrents in Disney’s comics. As previously mentioned, Donald is always on the brink of bankruptcy, yet always able to find employment, but always useless enough that his boss is justified in firing him. On the occasions where Donald visits a factory or place of production, only one worker is ever present, usually a caretaker of sorts, overseeing a workplace without workers – ‘the world the bourgeoisie have always dreamed of. One in which a man can amass great wealth, without facing its producer and product: the worker. Objects are cleansed of guilt. It is a world of pure surplus’.

This ideology in which the worker and their labour is erased was not just confined to the stories within the pages of Disney’s books. In his introduction to the book, David Kunzle explains how Disney, ‘who never by his own admission learned to draw, and never even tried to put pencil to paper after 1926′, went to extraordinary lengths to erase traces of any individual contribution to his products, collecting all awards on behalf of writers and animators, and ensuring nobody knows the name of, for example, Carl Barks, who created over 7,000 pages of Disney comics which, at their peak, solid between 3 and 5 million copies worldwide.

Disney also reduces protest and collective action to banal indulgences in a number of ways. When Goofy wins an art contest after kicking over some paint cans (‘Gawrsh! I wasn’t even trying!’), art is denied its subversive political power. When a crowd of protestors carrying innocuous placards reading ‘PEACE’ and ‘LOVE’ march past Donald’s lemonade stand, the offer of free drinks immediately turns them into a mob (‘Moral: see what hypocrites these rioters are; they sell their ideals for a glass of lemonade’).

In one comic which satirises the Vietnam War with a battle in the nation of Unsteadystan between the insurgent Wahn Beeg Rhat and the benevolent Prince Char Ming, the former’s political revolution is spoiled when his own soldiers decide ‘it’d be nice for Unsteadystan to have a King again, like in the good old days!’ Whether in consumption or conflict, the message is the same – when the masses revolt, what they really crave is suppression.

Existing in a world where the boss is always benevolent, where the working class is entirely invisible and where Donald is always rightfully dismissed, Dorfman and Mattelart argue that Donald’s stories arguably present the ideal capitalist subject – ‘Just as money is an abstract form of the object, so adventure is an abstract form of labour’. This ultimately reinforces ‘the basic myth of social mobility in the capitalist system. The self-made man. Equality of opportunity. […] Each child starting from zero and getting what he deserves.’

Now over four decades old, many of the analyses in How to Read Donald Duck are understandably dated. It would be interesting, for example, to read Dorfman & Mattelart’s reading on the paternalism which now permeates many of Disney’s contemporary narratives (Finding Nemo and Hercules, for example, the latter of which has its own interactions with capitalism and celebrity culture).

That being said, that idea of the virtuous, non-familial individual claiming what is rightfully theirs against an unruly usurper still rears its head often enough in slightly more imaginative forms – the crime committed by James P. Waternoose of Monsters Inc., for example, wasn’t that he was a ruthless capitalist, simply that his desired business model went beyond exploiting his workforce to actually terrorising children.

This current political climate is also an interesting time for Disney’s work, which has become a battleground of sorts for various right-wing reactionaries arguing whether the company’s creations are the brilliant archetype or sinister antithesis of traditional western values.

At a time when the right-wing is struggling more than ever to reconcile its absolute political power with its dwindling cultural power, it’s not surprising that the right’s more opportunistic actors would seek to locate themselves in mass media, or failing that, insert themselves by force. It’s this which has turned middling shows like Roseanne into ideological battlegrounds – the promise that your guy winning would make you great again, when in reality, walking into a restaurant with a red cap on these days means there’s a high chance you’ll be left waiting 30 minutes to order starters and your steak will show up burnt.

This is the problematic effect that identity politics can present, to all factions, in the hands of those who don’t know how to properly mobilise it. In the hands of the right, it becomes a tedious scramble to argue that, in fact, Spongebob Squarepants was in fact an idealised neoliberal subject fighting against the dangerous socialist Plankton who believes burger recipes should be distributed equally. In the hands of the left, identity politics becomes the activism of production and consumption, where representation and cultural power is the highest form of power and where the worker can consume their way out of oppression.

As this book powerfully demonstrates, perhaps it would be more effective for the left to focus our energies on more pressing battlegrounds, and borrow some spirit from Dorfman & Mattelart themselves, written as they were political exiles in 1975:

How to Read Donald Duck: Imperialist Ideology in the Disney Comic is available now from OR Books. 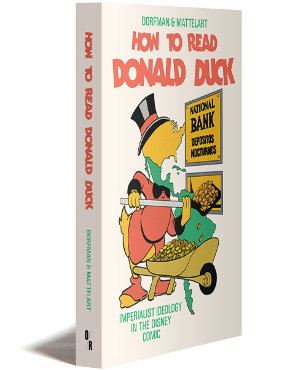