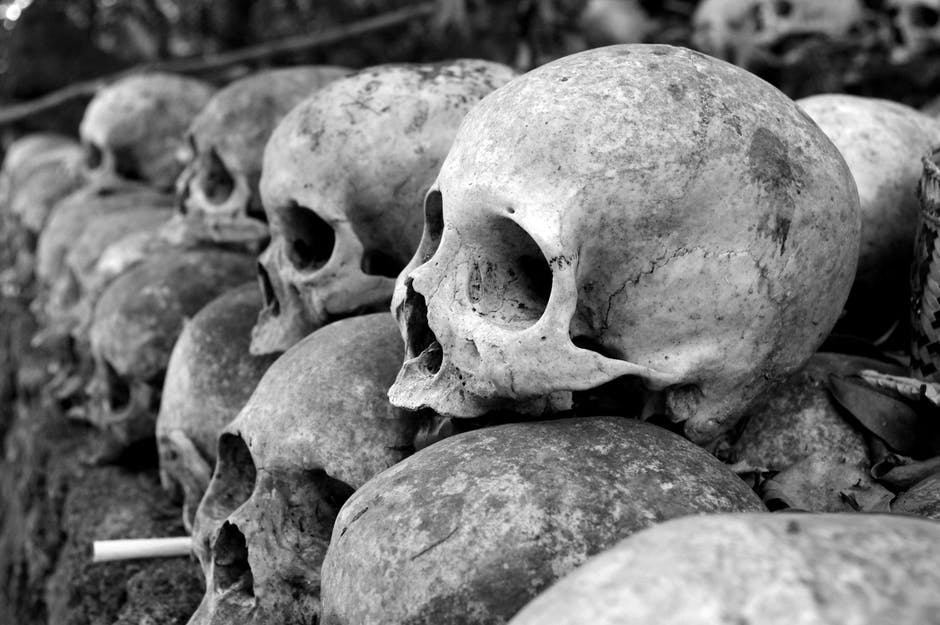 ‘At this point attention must be paid to destructiveness as the psychological basis of the fascist spirit. The programs are abstract and vague, the fulfillments are spurious and illusory because the promise expressed by fascist oratory is nothing but destruction itself. It is hardly accidental that all fascist agitators dwell upon the imminence of catastrophes of some kind. Whereas they warn of impending danger, they and their listeners get a thrill out of the idea of inevitable doom, without even making a clear-cut distinction between the destruction of their foes and of themselves. This mental behavior, by the way, could be clearly observed during the first years of Hitlerism in Germany, and has a deep archaic basis. One of the West Coast demagogues once said: “I want to say that you men and women, you and I are living in the most fearful time of the history of the world. We are living also in the most gracious and most wonderful time.” This is the agitator’s dream, a union of the horrible and the wonderful, a delirium of annihilation masked as salvation.’

– Theodor Adorno, The Stars Down to Earth

If a passage exists that more accurately describes the present moment than the one above, I haven’t found it. Written by the German philosopher Theodor Adorno during his political exile from Germany spent on the west coast of the United States, it, like much of his political writing, identifies the “death drive” as one of the core components of right-wing ideology and oratory.

We’ve seen that evocation of a circular loop of death and glory on both sides of the Atlantic. Both the Leave.EU and Trump election campaign were hinged upon pulling a doomed nation back from the brink, and though only the former was an actual referendum on the political direction of the country, the election of Donald Trump as President of the United States was arguably another battle for the heart, mind and trajectory of a nation. Trump didn’t win the election; the status quo lost.

Problems arise, however, when a harbinger of doom and gloom achieves victory. One cannot continue to deplore the destruction of the nation when it’s your hands wielding the power to change it. Both the election of Donald Trump and the vote to leave the EU were political bumper-chasing. As has been well-documented by now, neither of the leading proponents of either movement ever envisaged, less still wanted, victory.

They were just self-interested contrarians casting of hot oils into the cold, stagnant waters of neoliberal discourse. Had things gone as intended, the violent spluttering they caused would have made for an interesting view while they lasted. Having instead erupted in a destructive blaze, they left someone else to put out the fire, or else slam their foot on the accelerator and cross their fingers.

For this reason, the contrarianism and fury must continue. It was never about defeating their opponents; it was about the act of opposition itself. Insofar as either of these groups has an ideology, its true nature is so grotesque that it necessarily needed to be concealed.

Following the election of Donald Trump in the US, there was an expectation on the right that their golden calf would solve all of their problems. As it quickly emerged that this Shangri-La had not manifested, that Trump would not be “draining the swamp” and dispensing with all his political and ideological opponents, there became a need for an equally-impenetrable dream that maintain the drive. This manifested in “Qanon”, an ever-morphing conspiracy of child sex rings, undercover investigations, secret arrests, and covert justice, always targeting the right-wing’s enemies, always conveniently two steps away from achieving the ultimate justice.

The true ideal of contemporary American conservatism is too hideous for even its most ardent supporters to confront head-on. All the horrors they warned of under the Obama administration—concentration camps, militarised police, neo-fascist groups, political suppression and government agents at the door—have come to fruition, but from inside their own house, working toward their own ideal; ‘a union of the wonderful and the horrible’. But to be confronted with the reality that you are the death drive you so violently feared would require the right to confront the true horror of its fascist ideal, so instead, like Guy Pearce in Christopher Nolan’s Memento, they kill the truth-teller, destroy the evidence, create a new lead, and start chasing it. Anything that distracts me from my path is fake news. Anything that points to our guy’s guilt is a conspiracy. Everything is terrible because of everyone else, but everything is wonderful because of our leader. Everything is beautiful and nothing will hurt – at least, not for us.

In the UK, this same directionless death drive has taken the form of empty, circular rhetoric that promises no answers, only deeper plunges into the void. “Brexit means Brexit”. “No deal is better than a bad deal”. Warm. Cold. Warmer. Too hot. Cold. At first we were promised it would be smooth and painless. Then we were told it would be rough, but worth it. Then we were told to prepare for the worst. And now, with the reality setting in, we’re told that the problem is we’re just not driving fast enough. Hold my hand, baby, let’s collide with the wall—together.

“Brexit means Brexit” might sound catchy, but its rhetorical directness betrays its utter meaninglessness. The portmanteau, “Brexit”, was born as a quick and snappy term for the more complex and cumbersome process of “British exit from the European Union”. The phrase denotes an act, a meaningful action. To employ it is to raise the question of what that process entails.

Devolved into a noun, “Brexit” becomes a simplified, obscure, ambiguous object. It is the thing that means what it is, and what it is is the thing that it means. If you don’t understand it, it’s because you don’t know what it means. Like Kafka’s Castle, it’s not that the process within “Brexit” is inaccessible or might not even exist, just that you are not one of those privy to witnessing it.

It should not surprise any of us that, as March 29th, 2019 looms closer and closer, that the messaging around Brexit has shifted from dauntless optimism, to staunch pragmatism, to an enthusiastic embrace of collision and collapse. Total disconnection and atomisation of the British state and population was never the worst possible outcome; it was the ideal.

The United States is fortunate to have the concept of libertarianism in its mainstream political discourse. Pure marketisation of the state and social sphere is precisely what Brexit’s champions truly envisage – concealed behind the empty rhetoric. As we’ve seen in the slow and steady structural dismantling of the NHS under Jeremy Hunt and now Matt Hancock, the aim of the Conservative Party’s most ideological members has always been the steady dismantling of the state to the point of near collapse, then the leveraging of that constructed collapse into privatisation.

A nation disconnected from trading regulations, red tape, international law and so on, presents a wide open plain where everything is up for grabs to the highest bidder. Collapse of national infrastructure and social safety nets opens more doors for privatisation and marketisation. Can’t afford to maintain social housing? Sell it off, and let the landlords handle it. Struggling to pay for police or prisons? Let private security services take over. Climate change? Not a problem, people can always move elsewhere. Unexpected illness? Private healthcare will cover it.

The problem with letting individuals like Jacob Rees-Mogg, Boris Johnson, Liam Fox, Nigel Farage, Nigel Lawson and the rest shift political discourse toward such a destructive and alienating state, is that they will never be able to envisage a world in which they might be the victim. This is why so many of libertarianism’s most fervent advocates on both sides of the Atlantic are rich, white men. The threat of rising fascism, nationalism, and neo-imperialist wet dreams never manifests as a threat to them, only as another space for potential profit and exploitation. There is one word for “crisis” and “opportunity” – it just depends whether you’re touching the handle or the blade.

But the same Shangri-La that was promised in the United States can be seen in Brexit. There was a promise of a land of milk & honey that will most likely not come to fruition. At the heart of it, Brexit was always a pursuit of a nostalgic past that is long gone, if it ever existed at all. It was the bereaved widow hanging off the word of the psychic, telling them that their husband wants them to know everything will be okay. It’s the psychosis-inducing belief that, if you close your eyes and clench your fists hard enough, the “Great” in “Great Britain” will mean something again. That it will be something other than the rhetorical representation of centuries of imperialism, slaughter, colonialism and violence. It is the belief that by cutting ourselves off from the world, the map will suddenly turn back to pink. It is the death drive.

After all, we were told that having cut ourselves free of our European neighbours, we would be free to trade with our former colonial subjects in the Commonwealth. Then, the Windrush Scandal revealed the reality of the Brexit dream. A return to domination. Mutual cooperation, but on our terms. And when that dream doesn’t hold, where next? Perhaps we could dominate them all over again, if not through military might, then through neo-imperialism, foreign debt, development and transnational gentrification.

The beauty of Brexit, Trump and the new authoritarian right is that its pursuit of violent ends has no limit. You can question it as much as you like, but your criticisms will always be met with the same response. The problem isn’t that we’re going the wrong way, the problem is that we haven’t gone far enough. So here we are, in an age of unquantifiable terror, being sold a dream of endless hope.

If we want to achieve anything, you should be ready to sacrifice everything.

But you go first.

‘In principle everyone, however powerful, is an object. […] No agreements, in the fascist era, are binding enough to secure headquarters against air attacks, and commandants observing tradition are hanged by Hitler and beheaded by Chiang Kai-shek. It follows directly from this that anyone who attempts to come out alive – and survival itself has something nonsensical about it, like dreams in which, having experienced the end of the world, one afterwards crawls from a basement – ought to be prepared at each moment to end his life. […] Freedom has contracted to pure negativity, and what in the days of art nouveau was known as a beautiful death has shrunk to the wish to curtail the infinite abasement of living and the infinite torment of dying, in a world where there are far worse things to fear than death.’